Beau and The Soap Opera

Well, a few days have passed, and things seem to be getting back to normal.
I've been thinking though, how, even when doing things for the best of reasons, misunderstandings are apt to arise.
Take, for example, the recent Incident of the Unknown Substance ( see previous Blog posting 'Beau Smells Trouble'.

Misunderstanding No.1
I thought that Dad would share my curiosity regarding the stuff that I rolled in and brought back to the boat; I WAS WRONG...Having got it all over his hands when he grabbed my collar, he was, selfishly, only interested in wiping it off on the grass.

Misunderstanding No.2
I thought that, if Dad wasn't interested, then Mum certainly would be, so I ran down the boat and put my head in her lap so that she could get a good look at what I'd brought back.
THIS WAS A MISTAKE....Mum just shouted 'MIKE!!..He's rolled in something!..Get him out of here!!

Having just finished cleaning off his hands in the grass, Dad heard Mum shout, and came running down the boat..

Misunderstanding No.3
In case he tripped over me on his way in, I thought I'd better get out of his way, so I jumped up onto the bed.
THIS WAS ANOTHER MISTAKE....Seeing me lying on the bed, Dad grabbed me by the collar to get me back onto the floor, but, as my collar was still carrying a reasonable quantity of the unknown substance, Dad, once again, had it all over his hands.........

The sticky stuff that I had brought back to the boat was, by now, starting to flake and drop onto the floor in lumps, so Dad decided that he had to get me cleaned up as soon as possible. His decision was to utilise the shower. THIS TIME IT WAS HIS MISTAKE........

Dad got the shower running, opened the door and tried to shove me in. Out of politeness, and as it was me that had got him covered in the stuff, I thought that he would probably want to come in too....
So, whilst Dad shoved, I suddenly walked forwards....and viola!!...not a huge amount of room, but we were both in!
APPARENTLY, THIS WAS ALSO WRONG!!...For several reasons.....
1. Dad still had all of his clothes on, though to be honest, they would have needed washing anyway
2. The shower door was still open, and the bathroom floor was already awash
3. The nice-smelling squirty soap that he needed, was still outside of the shower.......

Dad turned off the water, got out of the shower in his wet clothes and said 'WAIT! while I get a towel. (I suppose he wanted to dry himself off).

Well, I couldn't wait for Dad to come back, and I knew that Mum would want to see me now that I smelt nice again, so I ran down the boat and shook off all of the dirty water in front of her so that she could see how lovely and clean I was....... 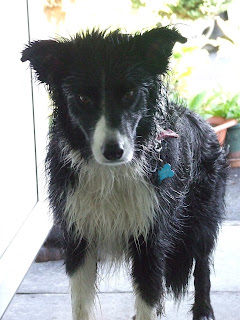