Beau and People in High Places

I've hardly got over the shock of taking 4 months to get to London and back when Dad said that we were off again!!
If I heard him right, he said that he had to get his bottom painted black this week, or it would go rusty and start letting water in. Apparently getting it painted once every 4 years is sufficient to keep him watertight.

We left early in the morning, before even my mate Harley (the Springer Spaniel) had called into the boat to hoover up the last of my breakfast biscuits.
Despite our early departure, there were a couple of people about to wave us goodbye, which seemed a bit over-the-top when we were only going off to get Dad's bottom waterproofed.
There were loads more people around when we went under the bridge into town. This time they were pointing at me, taking loads of pictures and talking in strange languages.

After 3 long days on the river, I was getting really fed up, but finally we arrived at a big boat park which was so full that Dad had to park right under a huge rusty crane that didn't look too safe, so we all got off. It was just as well really, because no sooner had we stepped onto dry land when this huge machine burst into life, picked up my home, swung it right up into the air and dumped it on some concrete, right by the side of the river.

I decided then and there that the people in this boat park were crazy.....there we were, all standing on the grass and they've put the place where I live on blocks of wood so tall that we can't get back onto it!!!!

Dad went to speak to the man that had picked up our boat, and I guess that he must have told him of my worries, because he came back with a huge set of steps, pushed them against the back of the boat and left, saying 'There you go'...                  THERE YOU GO!!!.......I'm a dog, not a rock-climber!!,
I don't know about stairs, I've never had to climb ten foot to get to my food-bowl before, and I don't think Dad's used to high altitudes either.

Mum, of course, as the most practical person in the family, came up with the answer....She simply said 'If you two don't stop faffing around and get onto the boat THERE WON'T BE ANY TEA!!'
So, putting our worries aside in the name of family harmony, and desparately in need of sustenance, we were soon up the steps and leaning over the back rail to look at the ground...many feet below, and got to wondering how, now that we are up...how do we get down???...
...........and after all of this trauma, when and how are they going to paint Dad's bottom?? ...

Doubtless Mum will have an answer for that as well... 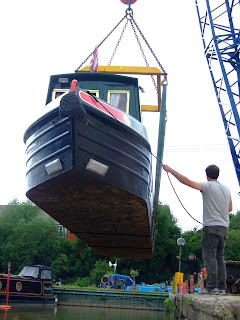 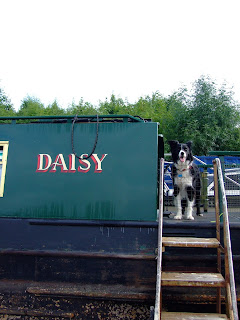 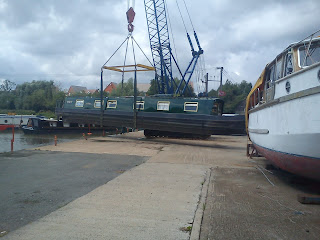