Beau and The Hidden Box of Torture

We've been here for about 10 days so far, and I think that Dad is getting bored. He's polished the boat - twice, and even scrubbed off the black gooey stuff that comes off the chimney onto the roof in Winter. He's put black polish on the stove, cleaned my paw prints off the radiator in the bedroom, and now he's really getting under Mum's feet. (So that makes two of us!!)

There's been a black box behind Mums chair for as long as I can remember. It's had books on it, been covered with an old dog blanket, and I think that Dad used it once to stand on when he fixed a light in the roof.
Anyway, yesterday, with a shout of "I know what I'll do!!", Dad leapt, (as only a 61 year old can leap), dived into the corner behind Mums chair and dragged the long-hidden box into the daylight for the first time in years.
From out of its depths, came an object of shiney red, with little white buttons all over it. Within seconds, Dad had pulled it apart and pressing some of the buttons, produced a noise like an asthmatic cat being scalded with boiling water.

Squeezing and pulling and pressing of white buttons went on for what seemed to be several lifetimes; my ears were ringing and Mum had long ago left in search of some peace, standing under the loudspeakers at the railway station.
Dad finally said that he'd practised enough for one day and carefully put the squealing red monster back into the black box.
Peace and quiet eventually returned, my ears stopped ringing, and Mum came back with a small bag from the B&Q place.

The black box has gone back behind the chair again, but now it has a shiney padlock on it.....I could be mistaken, but last night, I thought I heard the tinkle of keys being quietly dropped over the side of the boat. 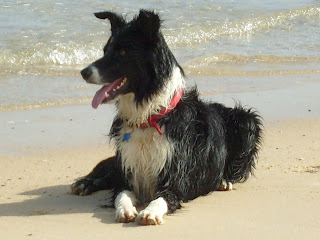