Normally, I wake up and have a look outside to check on the weather and compare it to the rubbish that Dad gets off the radio.
Because of where we park the boat, I can usually guarantee that I will see trees, bushes, and occasionally, overweight men running past who should really keep their legs covered up, and certainly shouldn't be wearing tight black shorts with lumps in all the wrong places.

But today, we were surrounded on all sides by men in camouflage army suits, and judging by the amount of kit that they had brought with them, they were going to be here for a long time. The towpath was stacked full of boxes, bags, tents and all sorts of other stuff that I couldn't image a use for. In most places, the path was almost completely blocked, so heaven knows how the bikes and buggies were going to get through.

Dad said that he'd seen this sort of thing before, and we had to get out of there NOW!!....so without having time for my morning workout with the squirrels in the Park, Dad, who is not known for his speed of movement, amazed us all by getting the boat going as loud as it could, within a matter of minutes.
In any event, Dad's unusual morning turn of speed didn't do any good, 'cos as soon as we got going, the men on the bank put really long poles across the canal to try and stop us from getting away. Some were so long that they nearly touched the bank on the other side.
Dad was pretty determined to press on, so he headed for the poles and the men left it until the last minute to lift them out of the way. Even so, they were determined to upset us, because, on the end of each pole was a bit of string to which they had tied something slimy and wriggly, and I think that they meant to drop it on us as we went by.

Dad said it was like a game of chicken, but I've never seen chickens do this sort of thing. Anyway after a couple of miles, there weren't any more men with poles, so I think it was just that we'd parked in a bad area.

It made me think though.........you spend all day cruising along on your boat, you park it up in the middle of nowhere, you go to sleep and when you wake up, you're the victim of rural violence. I know that Dad thinks I'm a bit paranoid, but my worry is that I might not be paranoid enough............. 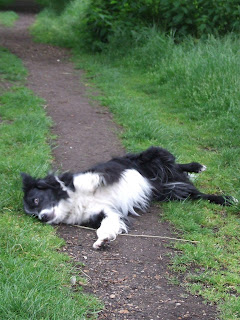