We had to move from our old parking spot in Berkhamsted. Dad said that shopping in White Rose was costing him more arms and legs than he was happy to part with.
I personally think that it was the price of his bottles of beer that clinched it, because their two for the price of three offer didn't quite meet his daily needs.

So I gave the local rabbits their early morning exercise over on the Park, ducked the geese, goosed the ducks, and, with a heaviness of heart, I left my final pee-mails along the towpath, and we were off to pastures new. 'Beau has left the building!!', ...and I can only hope that another of my kind will pass this way to keep the local rabbits on their toes............

We travelled about 7 miles which took most of the day....the boat doesn't go very fast, and if  Dad pushes the white lever thingy on the side, the boat gets louder, rattles a lot, and makes more smoke, but we still don't seem to go any faster......in fact we got passed by the same group of grey-haired old ladies twice yesterday; once on their way, and again on their way back!

We came to a junction and turned left into a very narrow bit of water, Dad said its called an 'arm', but it looks like a ditch. Anyway, after about a mile we came to a dead end and had to turn around and we still hadn't found a place to park. On the way back down the ditch, we finally managed to find a place under some trees, and something to tie the boat to.

Tomorrow we're going exploring, hopefully to find a suitable place to play football. In the meantime, Dad's taken a couple of pictures of me 'doing my thing', I particularly like the first one where I took the ball on the half-volley and headed it straight past the keeper ......straight into the canal.
My 'ball-girl' (Mum) had to go over the bridge to pick it up. .....Sad, but if they bought me a proper set of goalposts, I could practice this sort of thing more often.......Enjoy................... 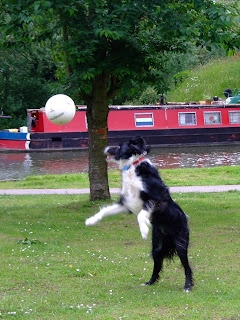 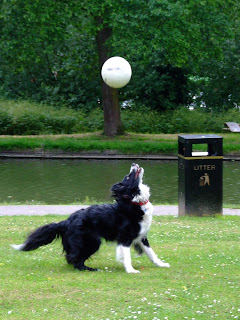