Last time we were here, it rained and rained.......we've been all the way into London and back out, and now that we're back here.....its still raining!!

The plague of flying Pekinese seems to be over. It's either because the wind has dropped, or because Rosie the Rotty, (who bequeathed me her football), has given up being a Veggie.

The football practice is still going well, Dads dribbling is pretty much as it was, but I might have to give up heading the ball, because I looked in the mirror the other day and I'm sure my neck is getting shorter. We saw a bulldog a couple of days ago and Mum said that's what I'll look like if I don't take it easy.

During my observations of the people using the towpath round here, I've noticed that an awful lot of people are going along talking to themselves. They're waving their arms about, laughing, saying things like 'No waaaay! and 'You dint!!, and 'OK, laters man!!.....
Anyway, whatevvaa.......
Mum says that they're probably using 'hands free', but there's far too much arm action for that to be true, or, she said, they might be using an 'eye-phone', but I'm not sure that they could talk and see at the same time if they were using something like that.
I'm trusting my sheepdog intuition here, and coming down on the side that says that Berkhamsted has a lot of people who are lonely, and who use the towpath as a form of therapy. I, myself have been known to mutter to myself quite a bit when Dad isn't operating on my frequency................... 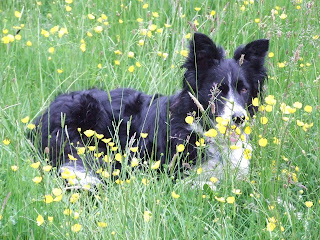