We're still here...
The weather has turned really bad with lots of rain and strong winds. I've seen at least two Pekinese flying past the window where the wind has got under their ears.

We were living dangerously yesterday;... we pinched a football off of a local Rottie called Rosie...well what actually happened was that her owner had found the ball in the canal and had fished it out for her to play with. When she came past our boat, things got a bit boisterous and I snouted the ball back into the canal and it floated away.
When Dad took me over to the park on the other side of the canal, there it was against the side, so he fished it out again. It wasn't in too bad a condition; the canal had washed off most of the Rottie spit (why do they all do that?), so we got into the football thing for half an hour or so, until Dad got tired and we had to go back to the boat.
It was, apparently, quite a good time to find a football, because Dad said someone called Fergie has just given it up, and the job doesn't sound too difficult if we could practice now and then.
Mum said she thought Fergie had given it up a long time ago when she married that Prince Andrew, but she could be mistaken.

Anyway, we went out again today, in between the rain showers and the plague of flying Pekinese, and Dad is getting rather good, well, at least his dribbling isn't any worse than normal............... 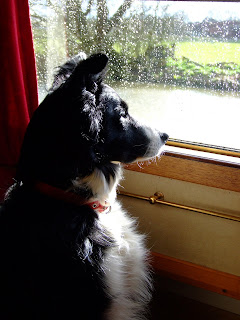