Well, it was worth the wait.
Mum and Dad have been parked here for 5 days now, waiting for this Festival thing to start. Its been pretty good though, because there are big lakes with loads of geeses, ducks and swans, so there have been loads of opportunities for me to introduce myself, and big areas of grass with stuff to roll in and to play more football. Dad reckons I could be another Beckham, (whatever one of those is), but apparently, I would need to change my hairstyle and speak funny.

I discovered that the real reason for us being at the Festival was centred on a display called 'The Beer Tent', where we spent a lot of time 'relaxing' with some very loud music. But the time came for us to go into an area where I had to parade around with a load of other dogs, who I still wasn't allowed to play with. A lady asked Dad all about me, so obviously she didn't know about my blog-site, then after a while this chap comes over and says congratulations to Dad on having such a fine looking dog. I could have told him that without all the parading around......but apparently, that's show business......and I did get a big blue badge. 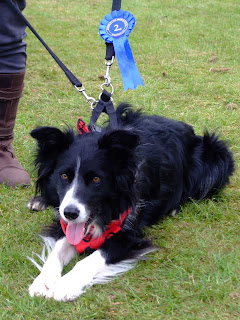 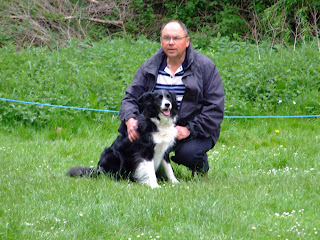