Dad says that the old boatmen (apparently there are some, but not many, that are older than him), used to call this place 'Ricky'. Mum says that with all the horrible locks round here, it should have been called 'Tricky'.

Anyway, I really like it....yesterday we parked the boat near some woods that have loads of tracks that I ran around...nearly got lost, but I'd left a p-trail behind me so I was able to sniff-nav my way back.

At the top of the woods I found a huge garden lawn where people were walking around hitting little white balls with thin sticks........and the whole thing was a bit weird.
For a start, they were hitting the balls as hard as they could, and there wasn't a dog in sight to bring them back, so after they had run out of balls, they all had a long walk across the big lawn to where they had landed, and try to find them.
Nobody said anything, but I knew one of them was cheating, because he shouted 'four', and he'd only hit one..........
The other thing was, that the thin sticks obviously broke quite often, because they all carried big bags that were filled with replacements....some had so many that they'd put their bags on little trolleys.

Whatever it was that they were doing, in my opinion, they would have had more fun by using thicker sticks, bigger balls, and a couple of dogs to bring them back. 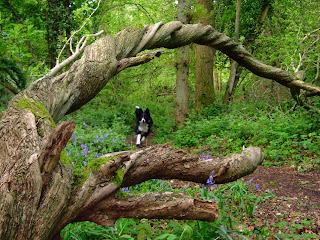